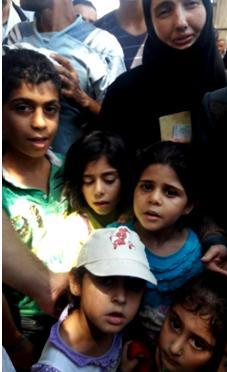 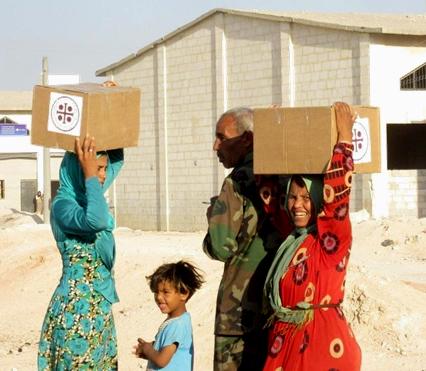 On Thursday 11th of August, 2016 the Monastery of St James (MSJM) Humanitarian Assistance Team took a convoy of emergency aid from Homs to the Aleppo countryside for displaced people (IDPs) who have fled from the south-western suburbs of Aleppo to the countryside, SE of Aleppo.  The convoy brought drinking water and 1000 emergency food parcels donated by DORCAS Intl.  MSJM also had clothes and medical supplies for the Hospitainer operating in Al-Nayrab Camp.  The convoy of 3 trucks went to Homs, Al Mishrafe, Salamiyye, Isriya, Khanasar, Al-Safirah, Al-Nayrab.   This mission brought diverse challenges, especially security.  But after an assessment by MSJM field officer in Aleppo, Mr Amjad Jisri, the possibility of giving emergency aid outweighed the security risks.

The emergency situation: While the IDPs flooding into central Aleppo have been receiving aid from the UN agencies and NGOs with good reserves of food and NFIs, the IDPs coming from Aleppo into the countryside (rif Halab) have been deprived of everything.  This is because, due to the siege, the UN agencies and NGOs were unable to cross from central Aleppo into the countryside.  No one dared venture to Aleppo from Homs or Hama or elsewhere.  That is why MSJM assistance team felt that it was our duty to move quickly and without delay, given the humanitarian emergency. With the help of some of our partners like the Red Crescent in Al-Safirah and Al-Meira we could immediately get in direct contact with the IDPs’ distribution/gathering point.

Our first distribution point was at the national school in Al-Safirah, where we began to distribute our food parcels to some 150 IDPs coming from 1070 area, (the residency complex in SW Aleppo that has recently been attacked) and from Hamidaniya.  We noticed children from 1070 area who we could see had dried blood on their skin and wounds, meaning that they never had the chance to be attended by a medical team. 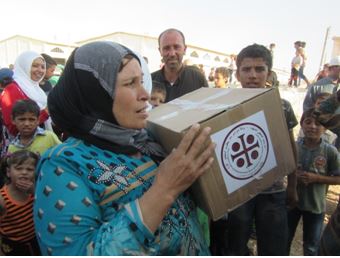 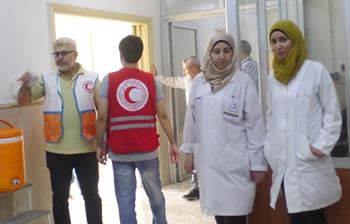 Secondly distribution: we moved quickly to Al-Nayrab camp to seek to service the Hospitainer, bringing them a new generator, supplies, an emergency power system, ten new beds.  Because of the influx of IDPs the Al-Nayrab camp was much more crowded.  And we saw that they have suffered real casualties such as civilians being targeted by snipers on their legs or arms. 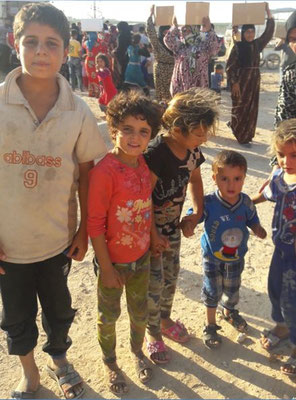 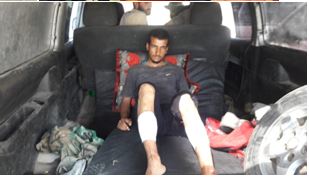 Thirdly, we moved on to Jibreen, which is an older camp for both old and new IDPs.  Mr Mahmoud Amer is the president of the support and emergency team in Jibreen.  We noticed the majority of these people were illiterate, unable to read, write, or even to spell their names.  So we had to put ink on their fingers and stamp their fingers to give proof of distribution.  They spoke an unusual form of Arabic.

At Jibreen our team visited their habitations and saw that they live with nothing.  That means the children on the floor without any shoes, in situations of total destitution. 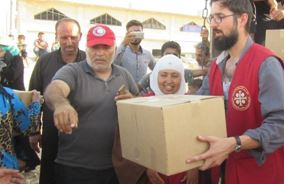 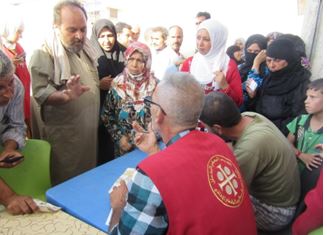 After this we wanted to deliver the remaining 300 parcels to the Red Crescent in Al-Safirah, but this time in another school.  But because new IDPs were arriving from 1070 and Ramusa, and it was getting late we wanted to leave. So we left our 300 parcels and we were given a promise from the responsible that our proof of distributions will arrive within 24 hours by a special courier. So we went about 40 km, at around 6:30 after finishing Jibreen, and on the road to Isriya.  We received a phone call saying that the road was cut by terrorists, the Islamic State had taken control of the part of the road.  And so we had to come back during the night, in a place with nothing, no hotel or place.  And so we went back to Al-Nayrab to the Hospitainer.  Brother Raphael and Abu Ali were offered lodging at the Hospitainer.  The inhabitants of Al-Nayrab opened for us a women’s house who took us in (it was 11 pm and they treated us so nicely, like royalty, making a meal for us like it was 9 am!), And so we could eat and rest.  In the morning we heard that this part of Hanassir was ready, and we wanted to distribute before leaving.   We didn’t know how the situation was evolving.  At this time we were hearing bombs and shelling all around, smoke and turmoil, explosions it was a dangerous situation all over the place.  So I can tell you that our team was courageous and totally dedicated to helping attend to the basic life needs of this outcast population.

The 1000 food parcels were filled with dried breadsticks, crackers, halawa (sweet sesame butter), canned meat and tuna, with prepared meals of beans and hommos, marmalade, and cheese.  All beneficiaries were very pleased and our partners in the region want us to come back.  Assessment:  Even though we came with a lot of help, we could not provide for everybody.

So we made assessment on this map concerning the situation of the hosting community and of the IDPs.  On the map the red star is the Hospitainer, the blue stars are places where we distributed the latest food parcels, and the green stars are places where we have been assessing directly with the team or having reports from our partners.  Today in these places more than 6000 families are distributed in schools or other compounds, they are deprived of many basic things.  The medical situation is very difficult because the Hospitainer and a very poorly supplied  Red Crescent center are the only medical references in this whole region counting 400 000 to 500 000 people.

Friday the 12th after successfully finishing the distribution we went back by the same way, having some apprehension about the situation in Hanassir, but thanks to the Lord everything was normal.  And like this we could come back. What we have been facing is that those populations lack basic survival items: 1. Emergency food, 2. They have no kitchen, no electricity, no fire, no kitchen tools, until those are brought to them the best thing is the food parcels and water we have brought for them.

Now our next convoy will be 500 families, and we have received an offer of funding by the USA NGO called “Preemptive Love Coalition”.  In these packets we will add some NFI (non food items) such as soap and ladies’ sanitry products, milk and candles.

So what is most important for those populations are emergency food parcels and emergency NFIs.  Shampoo is not necessary, just normal soap is.  Towels and sanitary napkins.  Some badly needed medicines for chronic diseases.

We have seen children sleeping on the floor.  But because the seasonal weather is good, we are not asking yet for mattresses.  But if there are mattresses of course that is good. These populations come from 1070 and Hamidaniya.  But families had up to 12-14 children, sometimes many wives due to the practice of polygamy. 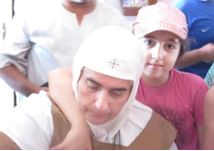 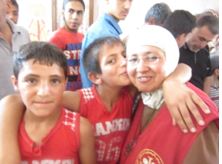 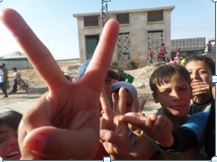 THANK YOU DORCAS INTERNATIONALIS FOR THE EMERGENCY FOOD PARCELS, A PIONEERING INITIATIVE! THANK YOU OCHA, UNFPA, DORCAS & CORDAID FOR THE MEDICAL EQUIPMENT FOR AL-NAYRAB MOBILE HOSPITAL:

THE SOLE WORKING HOSPITAL IN SOUTHERN AND EASTERN ALEPPO’S COUNTRYSIDE !